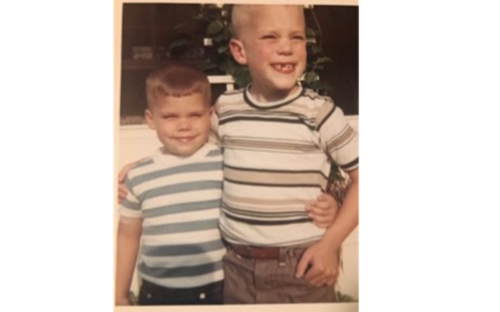 Do you designate how you dress? Or in other words, categorize your clothing by purpose or occasion? Let me explain. When I was a kid , I had three designations of dressing: school clothes, play clothes and Sunday best. My school clothes were the most versatile. As the name implies they were what I wore to school each day. They were purchased new each fall and spring and I had  probably between five and six outfits at any given time. It didn’t pay to own more than that as I grew out of them quickly. School clothes were then either handed down to my younger brother or re-categorized as play clothes. School clothes were what I wore when I needed to look “presentable”.

Play clothes were my favorite. As the name implies, they were what I put on after school each day, all day Saturday and after church on Sunday. After hanging up school clothes (well, I was supposed to, anyway), I would grab the shirt and pants lying on the rocking chair in my bedroom. Then, the day would truly begin. Play clothes were often school clothes that were on the verge of being completely worn out. That would explain why they were so comfortable. Often my play clothes included Sears Toughskin jeans. They never, ever faded and rarely ripped. You never babied play clothes. In them, you played tackle football (without pads) and explored the creek and open “field of dreams” across the street from my home. The final stop for play clothes, more times than not, was the rag bin.

Finally, there was “Sunday Best”. Growing up, I always had a sport coat, tie, dress pants and shoes. I would get a new set each fall and spring. The fall wardrobe would debut during the first cool Sunday in October, while the spring suit would always be worn for the first time on Easter Sunday, regardless of how early Easter would fall or how cold it was.This was the uniform I wore to Sunday School and church week-in, week out. The exception was the dog days of summer. Our church was not air conditioned at the time, so leaving the coat, and on the hottest days, the tie at home, was permissible. However, I didn’t have to wear my “Sunday Best” when I went to church on Sunday night or Wednesday evenings. School clothes sufficed on those occasions. The “Sunday Best” also got worn to weddings, funerals, school concerts, and the occasional night out at a “nice” restaurant. By the way, many Sundays I wore three changes of clothing, starting out with the Sunday best, changing into play clothes for the afternoon, then into school clothes for Sunday evening church activities

Not that long ago, every man and boy owned a suit or a sport coat and dress pants, even if it was not a part of his regular attire. Now, not the case. Very few dress up for church any more, workplaces are very casual and without that need, it is hard to justify buying formal clothes. You can now even rent a suit, not just a tuxedo, from my friend Jim Resch at J&B Formals in Chambersburg, if the need arises. My brother Ken is a partner in an accounting firm and he rarely wears a suit and tie any more. My brother Steve, who is in pharmaceuticals, still wears suits, but has gotten rid of the tie.

One trend I have noticed is that it has become increasingly harder to buy menswear. Most men’s clothing stores have closed.Many were more expensive than I wanted to pay, anyway. Department stores carry a smaller variety and even the Burlington Coat factory, who you could count on for a wide selection of men’s fashions, has shrunk their men’s department into a small corner of their stores.

All these years later, I still categorize my clothing. First, my work clothes. Working in radio, you can wear pretty much what you want. That is true. Early in my career, I decided I wanted to get into management. Back then, they all wore a coat and tie, so I started to dress that way, too. I think it got me more respect and I felt better, more professional when I dressed that way. I still do, but the tie is gone, having been gradually eliminated over the past decade. When I go home, I always exchange my khakis for jeans. Back in the 90s, the “Casual Friday” concept was born. While we don’t have one here any more (most around here dress casual every day), I still wear jeans every Friday. I also have a couple of suits in my closet for weddings and funerals, but even on those occasions, I am seeing less formal dress than just a couple of years ago. One of our former station owners thought it funny that an on-air DJ wore a coat and tie. He once said to me “shouldn’t you be wearing a Led Zeppelin tee-shirt?”

Lisa has basically one category of clothing that she wears pretty much seven days a week. She always looks good. But when she is home, and I mean home to stay, she puts on her sweats and flip flops and then there is no way, no how to get her to go out. If I want to get her to go out to eat or for any reason, for that matter, I’d better make my case before the sweats go on, or it ain’t happening.