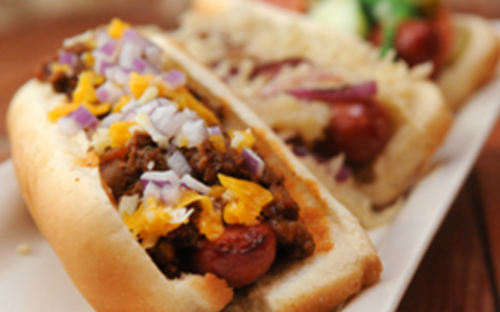 I’ll confess, I haven’t had a hotdog for decades. I’m one part proud and one part embarrassed. I suppose if I were being tortured making me eat a hotdog would be a good punishment. I know, lots of people LOVE them.

I tried not to give Jonathan hotdogs unless they were veggie dogs. Some of those are just as nasty.

I don’t know if I’d eat anything that has separated pig lips on a regular basis. I did eat them once upon a few years ago. I would always feel sick afterwards. I preferred them boiled to the point of splitting. Still they’d make me sick.

When I was little, I ran a concession stand at one of my father’s side businesses. I’d fall asleep at the counter. Good help is hard to find. Anyway, we had a hotdog rotisserie. I’d put them on at the beginning of the night. At the end of the night they’d still be going around and around. It was a Ferris Wheel for flies! My father worked somewhere where they would take the dogs off and store them in water overnight and then use them them the next day.

Back when The Rick and Lisa Morning Show first started, I would sit out on a blanket  in the sun and write stuff for the show all afternoon. I would make a hotdog for me and one for the ants. I would use it as a decoy. I would sit it next to me and the ants would devour it.

I won’t hate on you if you love hotdogs. We all have our own “poison” that we ingest. I drink diet soda. I know. It’s worse than chopped up separated pig lips. I also use “I can’t believe it’s not butter”!!!! Or, as my clever son would say when he was little, “I can’t believe you use that stuff”!!!! Touche’!!!

What’s your favorite food to throw on the grill? For me, it’s probably salmon followed by chicken. For Rick, steak followed by burgers. Good burgers. That’s a different blog all together! Comment below and tell me your favorite thing to grill on a summer day!