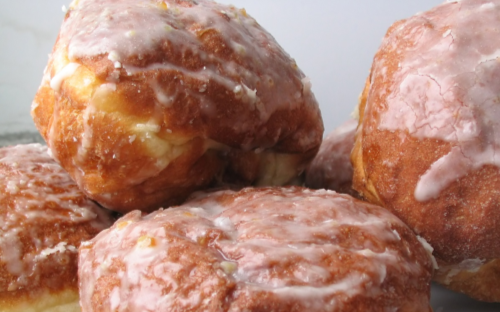 My grandmother and Aunt Carrie had a bakery in their kitchen that would put some grocery chain bakeries to shame.
They lived together when they became widowed. At Christmas, they’d bake about 20 cookie varieties filling umpteen dozen tins. Peanut Butter was/is (recipe lives on) my favorite.
On Shrove Tuesday, also know around here as Fastnacht Day, they would bake Fastnachts. As a kid, I bragged about these “donuts” to all my Baltimore friends. They had no idea what a Fastnacht was. I remember shaking them in a brown bag filled with powered sugar. They were good. Actually,  they were even more special than I  thought they were at the time. I liked them, but truth be known, I’d rather have some white cream in my donut. I still defended them like they were my children.
I knew Aunt Carrie, and after she died “Grummum” was sick when I would lift the lid to the cake save and nothing was underneath.
The recipe lives on.
My mother made them once or twice. It was a full days project. We didn’t appreciate hers quite as much. But now that she’s gone, I do appreciate them more than I did when she made them.
For the record, the recipe stopped with my mother. I’ve never had the desire to make them. It’s an all day project!!! It’s easier to buy them and then say, “these aren’t as good as the ones my Grandmother and Aunt Carrie made”!!!!!!

Here is the recipe, handwritten by my mother. The hand written recipe card is now as special as the memory of the fastnauchts! 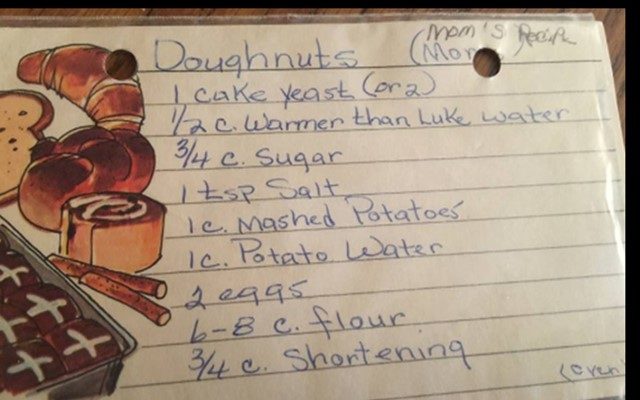