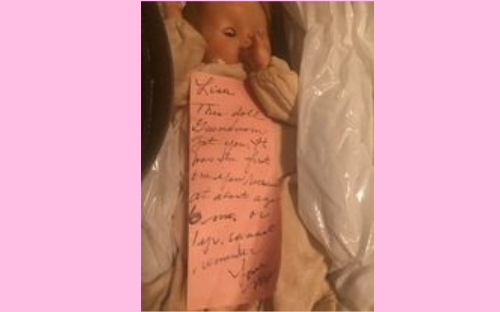 I was cleaning out my closet the other week.  I knew it was there, but it had been a long time since I looked inside it.
I’m talking about a very small oval plaid suitcase. I suppose for its time, it was used for cosmetics while traveling. But, that’s not what its purpose is today.
Inside this treasured old suitcase, contains my very first doll.
The contents have become more special with time. It’s not just my first doll (which is ancient by now) but it’s the note with it. My mother put in a handwritten note telling me this is my first doll given to me by my Grandmother. Both my mother and my Grandmother are no longer living.
I had forgotten my mother wrote that note. I don’t remember seeing it before. I’m sure it was in there, but I didn’t pay any attention to it. When I opened the case and saw the note, it was quite a surprise. It caught me off guard. I simply opened the suitcase to look at the doll.
Now you might think this is strange, but I have two pictures of my mother on my phone. I should say still on my phone. I have many many other pictures, but these two are different. One is the day before she died. The other is right after she died. I told you that you would think it weird. I just felt compelled to take it. I also don’t want to take it off my phone, even though it is save on a drive. Whenever I scrolled through my phone and came to those pictures, I would cringe and go by as quickly as possible. The other day, I stopped and really looked at them. The picture of her after she died doesn’t look anything like her. Somehow I am okay with the pictures. I still don’t want to take them off my phone.
It’s just like that note in the suitcase. It will stay there. And, I zipped up the case and the doll will stay in there in my closet.