My grandfather by Rick Alexander 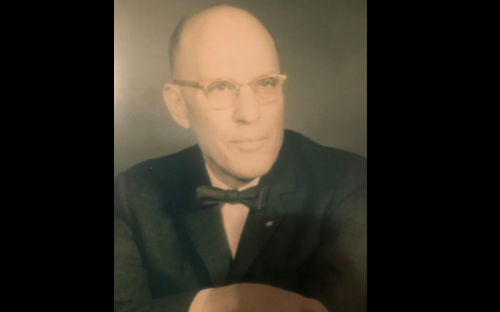 My grandfather
I’ll always remember January 31st as the date my mother’s father passed away. Although I was only twelve when my grandfather died, his memory remains strong. He and I shared a special connection. My mother could sense it early on when I was just a tiny baby. I idolized my grandfather. He was a successful man. Although he did not possess a college degree, he became a highway design engineer and eventually established his own firm. This was in the era when Interstate highways were popping up like weeds.

He became a financially successful man who enjoyed nice things and doing things in a big way. He also was a very generous man. To be honest, there was a period in my life when I looked up to him more than my own father, who was a more down- to- earth person.

He was not a healthy man. Forty years of smoking had left him with severe emphysema. Smoking no doubt contributed to his four strokes. I will never forget what happened when I was four years old. I was staying at my grandparents house. It was a Sunday morning. My grandmother had left for church to work in the nursery and I had stayed home with my grandfather. I had just used the bathroom and I called out to my grandfather for assistance. When he didn’t come after my repeated calls. I found him crawling on the floor. He figured he had a stroke, but couldn’t get to the phone. At age four, I hadn’t learned how to dial a phone and make a call. Fortunately, I had recently learned how to answer the phone. Be it miracle or just fortunate coincidence (I believe miracle), the phone rang. I ran into the kitchen, climbed onto a kitchen chair and answered the phone. It was my mother! I was able to relay what my grandfather was saying. She then called for an ambulance and the church to summon my grandmother. I’ve wondered how different the outcome might’ve been had I not been there or had my mother not called at just the right time, when he suffered his first stroke.

The day he died, I found out in a very understated way. While my grandmother and my parents’ deaths were anticipated, his death was not. The strokes had put him in a nursing home where he had been living for more than two years after my grandmother’s death from ALS. My mother got the call not long after lunch on a Thursday that my grandfather had just passed. She had to leave quickly, so she left my then five year old brother with our elderly neighbor and babysitter. Mrs. Brewer. This was years before our constant communication through texts and cell phones. So I arrived home to find my mother gone and to learn of my grandfather’s passing, rather matter-of-factly, from the babysitter!

In the years after his death, I learned a few things about my grandfather, not all of them complimentary. While he was wonderful as a grandfather, he was not always the best father or husband. I also stumbled across a family secret that I was never supposed to find out.

The most important thing I ‘ve learned is that everyone personifies good and bad, even though there are those who seem to lean hard, one way or the other. Recently Harrisburg, PA “Mayor For Life” Stephen Reed died. During his nearly thirty years as mayor, he did some amazing things for the city. On the converse, his time as mayor came to an end with scandal and debt. It ended with a primary election loss.

I ‘ve learned over time, all humans are flawed and broken in some way. As with my grandfather, people are both good and bad. No human should ever be lifted up in a way that only God should be.