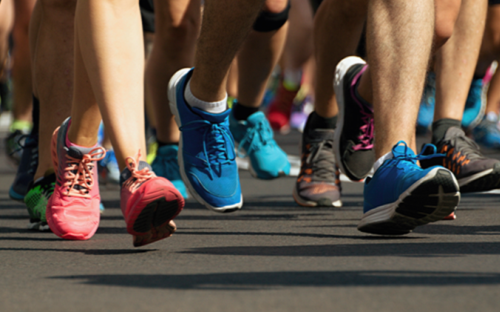 Hangin’ By A Shoestring

There is never, ever a good time for a shoelace to break! It is probably because our shoes are the last thing we put on before rushing out the door and we’re likely already late and mentally onto the next thing. The worst thing is that there is no warning that it is going to happen. You are tying your shoes like you have a hundred times before and then “SNAP”. It’s even worse when you are out. When it happens at home, you can change your shoes or maybe even replace your lace. Who am I kidding? Nobody preemptively  buys replacement laces anymore! But if it happens away from home, you are challenged to tie that shoe with the remaining lace remnant, trying to make it as unnoticeable as possible. Alas, even after you try to even out what’s left, that shoe always ends up looking like a four-year old who was learning to tie their shoes and used yours to practice on.

I’ve gone through many a pair of shoes without ever having to replace a lace.  It’s more likely than now, even with men, we all own so many shoes and don’t use them as hard, so we don’t wear out the laces very often. We tend to get rid of them long before the laces break. But on those occasions when one breaks, did you ever try to replace it with a matching lace? It’s dang near impossible! When did the shoelace industry branch out? It seems not that long ago there were just four kinds of shoelaces. There were black and brown laces for dress shoes, white for sneakers and those heavy-duty yellow and brown boot laces. Each was available in two or three lengths. That was it. The shoe world thrived on about a dozen laces. And they were available at every shoe and discount store. Not any more. I can’t help but wonder if this is not a conspiracy from the shoe manufacturers. They make it hard to replace the laces so we just buy a new pair of shoes instead. Hmmmmm…..

I have no idea how many different types, lengths and colors of shoelaces there are, but they never have the kind I need. And the after-market laces are never as nice as those that came with the shoes. On those occasions when I find laces that match the ones I already had, the length is never what I need. They are generally way too long. I hate to cut them to length because then they get all frayed and are almost impossible to re-thread through the eyelets. You know, a new shoelace should never end up looking old and frayed. Why, I paid $.58 for them! I know, I should probably measure the remaining intact lace before I go to purchase new ones. But who does that? Recently, I had a shoelace break on a pair of shoes that I wear frequently to work. I bought replacement laces that looked similar, but of course they weren’t. Not only were they too long, but too thick as well. They were hard to lace up and virtually  impossible to unlace. So, I opted not to replace the other “intact” shoelace. Now I have two different laces that have different colors and textures. But I am done messing with them. Plus, there is no way I am ever going to return shoelaces to the store. And you know, it seems that what happens is that soon after I replace shoelaces, I’ll come across a better match for the shoes than the ones I had just purchased. Hey what about this: custom-cut to order shoe laces? You pick the fabric, style, color and length!

Doesn’t it seem to you that tie shoes are antiquated and that they should have disappeared years ago? They’re like from your great-grandparents generation. If I could have all of my dress and casual shoes be of the slip-on variety, I would bid farewell to the lace. However, that is not the case. When I was looking for new shoes last fall, it appeared that most casual and dress shoes were tie shoes, not slip ons. Say what you want about millennials. When it comes to shoes, they’re not “loafers”.