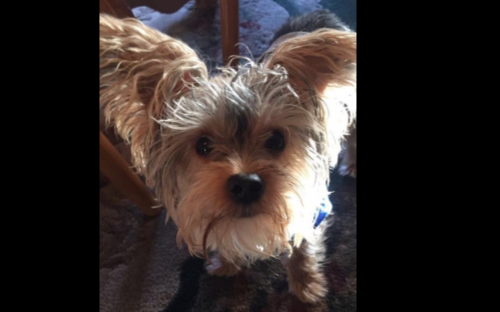 If it had been my decision, we wouldn’t have Nic, our nine month old male Yorkie pup. I had a dog as a teenager and raised a son as an adult. I was not looking to add the responsibility of another living thing, animal or human, at this point in my life. Lisa thought otherwise. And now, I wouldn’t have it any other way.

When we adopted him,  we decided Lisa would be his “Mumsey” as a Yorkshire Terrier; his breed roots are in jolly old England. And since I don’t like the term “pet parent”, I decided that I would be “Lead Dog”, “Big Dog”, or just plain “Dog”.

Since he came to live with us, I’ve been going home each work day mid-morning to take him out of his crate to allow him to pee and to have some human contact. Each day when I arrive, he acts like he’s just been rescued from a deserted island by someone he had long ago given up for dead. He’s crying and jumping and yelping when I release the hound from his captivity. The next ten minutes are spent giving him belly rubs and head scratches while receiving unlimited licks in return. When we first brought him home last September, this sequence was followed by a trip outdoors to do his business. Then he was returned to his crate and I would depart.

When the weather got cold, we opted for him to use the indoor pee pads rather than go out in the wet and cold. So far, it has worked pretty well, but that’s a topic for another blog. Now, when we conclude the lovefest-lickfest and he does his business on the pad (hopefully!), something strange happens. Nic will suddenly change from super affectionate to avoiding me like the plague and running away, perhaps realizing, I’m no longer his buddy, but his jailer. And man, is he fast! I swear he can fly. And he will not come near me, no how! Even his weakness, cheese, won’t even tempt him. I’m left trying to figure out how to coral him. I have to be careful that I don’t have to be somewhere soon after our visit as it can take me a half hour or more to catch him. Yesterday I managed to chase him upstairs and corner him in a bedroom. When he’s finally caught with no hope of escape, he lies down and surrenders.

Then there’s Nic at night. When I come home from work, Lisa is almost always there and has already liberated him. I then receive an abbreviated version of the morning welcome. And I’ve got to tell you, he can be a little jealous when I greet Lisa first. Then, much sooner than in the morning, he is onto other things. We all eat dinner together, so my return symbolizes food as he awaits his bowl of chicken, kibbles and whatever Lisa has in store for him. But for much of the evening, he is independent Nic. He gets to experience freedom, getting into things he shouldn’t, punctuated by periods of sleeping and pesting.

I will be seated on my end of the sofa recliner, either on my laptop or my phone, when Nic suddenly crawls up, lays down between my legs and takes a nap, generally with no warning. When he is in that mode, I’ll hold off going to the bathroom because I hate to disturb him. When I can wait no longer, I get up and implore him to stay seated. Most of the time, he jumps down and acts like he never was asleep. I guess it’s the watchdog in him.

The  weirdest part is when he suddenly changes from independent Nic or sleepy Nic, to bitey, pesty Nic. I’ll be sitting there, minding my own business, when without warning he’ll jump up and start playfully biting my hands and fingers. I guess that’s how he tells me it’s play time. Playing catch works for an undetermined time, but the length is up to him. Then he will stop as quickly as he started and crawl back up between my legs and go to sleep.

When it’s bedtime, I will say “you wanna go up?”, he’ll instinctively run up the steps. We will inevitably have to chase him down to put on his buffalo plaid checked pajamas. Finally, the lights go off and little Nic the Yorkie eventually snuggles up next to the Big Dog as the three of us drift off to sleep. Did I tell you I wouldn’t have it any other way?