Rick tells the story of how it became Rick and Lisa! 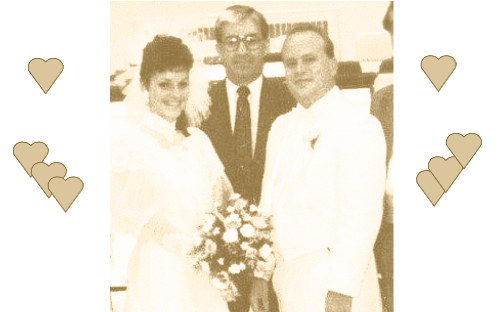 Note: the above picture, taken on our wedding day, is with our pastor at the time, Dr. Paul Baker. Dr. Baker lost his wife of over 65 years this past April. It is his first Valentine’s Day without June. Paul performed hundreds of weddings during the course of his career. If you feel led, you can send a card to him here at MIX95.1, 25 Penncraft Avenue, Chambersburg, PA 17201, and we’ll see that he gets them. We stay in close touch with him.

Thirty years ago today, February 14th, 1990, I proposed to Lisa! We had been together for four years when I popped the question. I went to the Chambersburg Mall to a now a long-gone jewelry store and purchased her a diamond so tiny that today I have to put on my  reading glasses to see it! It took me about six months to pay it off on my credit card. Up to that point, I had never even paid credit card interest. We were married about six months later, August 11, 1990.

So that begs the question, which came first, the chicken or the egg, rather the show or the relationship? Here’s the story, if you haven’t already heard it. I came to MIX95.1 (then known as WIKZ-95, pronounced wick-sea) to be the 7- midnight personality and then was promoted to 2-7 PM soon after. Back in the 1980s, I was a night owl, big time. When I still lived at home, my dad was an early riser and it wasn’t unusual for our paths to cross. I’d be coming in late when he was heading out for an early breakfast. In September of 1985, the station’s (by then called Z-95) morning personality was leaving. The program director at the time Matt Kellam asked me if I would take the job. I was up for the challenge (or so I thought), but wasn’t all that sure about changing my schedule  by 180 degrees. Being a young single guy, I liked to run around at night and in this lifestyle, that wasn’t going to happen. I took the position with the caveat that if I didn’t like it or he didn’t like what I was doing, I could move to another shift. That was nearly 35 years ago.

Hiring Lisa was Matt’s last achievement before moving from Program Director to Station Manager. I was then promoted to the Program Director Position position. As I welcomed Lisa to our all-male air staff, I cautioned the “boys club” to be respectful to our new female hire and not make her feel uncomfortable by hitting on her. She was hired in October. By January, Lisa and I were dating. Do what I say, not what I do, right?

Working the morning shift was tough. Really tough for an undisciplined guy such as myself. I wasn’t regimented about my sleep. Sometimes I would only get 3 or 4 hours of sleep, catching naps here and there. It was a lot tougher than I had anticipated changing to the new schedule. It didn’t help that I was in a new relationship and my girlfriend didn’t get off work until 7PM. By contrast, today I go to bed at 8PM.

I also wasn’t disciplined about preparing for the show, either. On-air shifts outside of mornings required a lot less prep, largely because they play a lot  more music. Mornings are a different animal and you just can’t fake it for long, as I soon found out. This was well before the Worldwide Web, so sources were a lot harder to find. It was like cooking from scratch each morning.

Truth be told, between the lack of sleep and stress of coming up with material for the show, I was falling apart. By the spring of 1986, I wasn’t sure how much longer I could do the show. One morning, I just couldn’t get out of bed.

Fortunately, there was a solution. When Lisa was hired, she had expressed a desire to be a part of the morning show. She felt she had progressed as far as she could as music DJ and welcomed a new challenge. We decided to see if we could pull it off together. Our first pairing occurred during the “Hands Across America” rally. We co-hosted that Sunday afternoon. It went remarkably well! I knew we had a future together as we had a horrific fight just minutes before going on the air and we were still able to pull it off.

Somehow or another, and I’m still not sure how, we convinced management to allow two people who had been dating less than eight months to co-host a morning show together. I have a sneaking suspicion that they didn’t want a talent like Lisa to leave. Lisa was the ying to my yang. She was so much more organized and focused than me. Plus, she has a great work ethic which is largely absent from this business. On August 4, 1986, the “Alexander and Harding Show” debuted. In 1999, we changed the name to Rick & Lisa, what everyone called us. We weren’t sure what we wanted the show to be about, but we didn’t want it to be about us. We did not talk about our relationship on-air, although we didn’t try to hide it when we were out. Morning shows back then were all about comedy, not relationships. We didn’t want to be judged on the novelty of a show where the co-hosts were dating. We wanted to be judged on content. In retrospect, too bad! There were so many missed on-air topics. And because we had kept the relationship secret on the air, there were so many stories we weren’t able to tell at all or without altering.

So when we married in August of 1990, we had been together as a show for four years and as a couple, even longer. We had kept quiet about it  for so long, it would’ve been awkward to announce we were getting married. So we didn’t. So, then there were a bunch more missed show content opportunities! Who knows if we would have ever said anything. But then came Jonathan!

In October of 1991, we found out that Lisa was pregnant. And to borrow from the Brady Bunch Theme: “we knew it was much more than a hunch” that it was time to come clean on air about our relationship. But how? It had been almost six years since we became a couple and had never mentioned it. Oh, but how do I do it? Lisa was due in June, so we had a little bit of time to figure it out.

The perfect opportunity presented itself on Valentines Day 1992. We arranged for the late Franklin County Judge William Kaye to come in-studio and officiate  a wedding vow renewal service for a number of our listeners. I wore a tux, leftover from a show we had emceed the night before. And at the end of the service, we announced we were married and were expecting a child!! I think we’ve made up for lost time over the years. There’s not much we don’t share on air.

So as the late Paul Harvey would say “and now you know the rest of the story”. On our show and in our marriage, we have had our ups and downs, just like any couple. But as I look back through it all, now hopefully more mature and a lot more disciplined, Lisa saved the show. And quite possibly me! I have never wanted to do life with anybody but Lisa. We are a team on the air and off!