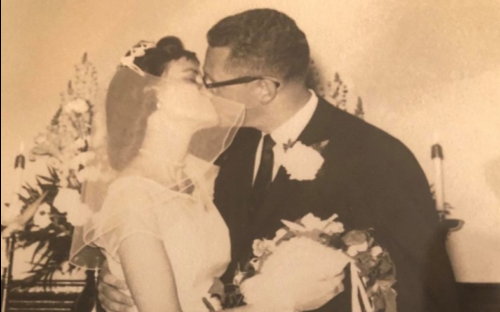 April 30th would have been my parents 60th wedding anniversary, They didn’t quite make it to their 33rd. My mother passed away from cancer at age 59. My dad died about a year ago. After my dad passed, we found their wedding album among his things. It was actually a replacement album as the original got destroyed in the Hurricane Agnes Flood. It had been years since I had last seen it and it was good to see my parents again looking so young, as well as my grandparents, whom I greatly miss, as well.

As I’ve written about on prior blogs, it was tough to lose my mom so young, soon after she became a grandmother. What’s difficult for me now is to imagine how things would have unfolded had she lived. Unquestionably, she and my dad would have grown old together. She would have reveled in her five grandchildren, particularly the grand daughters, as she never had any daughters of her own. She would have enjoyed watching her sons become successful in their respective careers. She lived long enough to witness Lisa and me getting married. Several years later, my mom died the same day as her middle son got married. The only grandchild she ever knew was Jonathan and he was only 6 months old when she passed. Having come from a small family herself, she would have embraced her growing extended family.

The really hard thing for me to envision is how things would have evolved, progressed and changed through the years, had she lived.  Would My parents have remained in the rancher in Hershey my brothers and I grew up in? Or would they have down-sized to independent or assisted living at some point? What if my dad had died first? The one thing I’ve wondered about is how she and my dad would have accommodated the holidays. Our house in Hershey was where our entire family always spent the holidays together. How we would have been able to fit our ever-growing clan in our small-ish dining room, not to mention trying to accommodate the schedules of in-laws, would have been interesting to observe. My mom would have found a wise and fair way to do it. As you yourself may know, the silver lining of having to bury a parent is that you only have to do it once.

Seeing the pictures of my parents on their wedding day reminded me that it was one of the few days my dad ever wore his wedding ring. My dad was not a jewelry guy. He rarely wore a watch and the only times I saw him wearing his wedding band was in pictures from their wedding and honeymoon. That was no reflection on his faithfulness to my mom. Any time he was asked why he didn’t wear it, he said it was because he was a printer and didn’t want it to get caught in the printing press or other equipment. I guess that was a good enough reason, but many of his printing colleagues wore theirs. He never, ever wore it, even after he retired from printing. So, I always thought it odd that when he remarried almost two years after my mom’s death, he wore his new wedding ring all the time for quite a number of years. I would occasionally wonder what became of his first wedding ring. It never showed up in any of the boxes of stuff he gave me or my brothers over  the years . We didn’t find it when we went through his personal effects after he had died. It has been our family’s custom to bury people in their wedding rings, not the fancy diamond engagement/wedding rings, just the simple gold bands. Both my maternal grandparents and my mother were buried in theirs. I would have liked to have buried my dad with the ring my mom placed on his finger the day they married. But, it was nowhere to be found.

And we never came across the wedding ring from his second marriage, either. While it is a nicer ring, I really don’t care what happened to it or if it ever turns up.

A couple of years before my dad’s passing, he had seemingly misplaced the key to his safe deposit box. The box was in his name alone, not his wife’s. Knowing that my dad was getting up in years,  I felt it was of high importance to get into it and find out what was in there. Dad wasn’t really sure, as his memory was failing and he hadn’t been into the box in a number of years. After scouring his house and satisfied that we didn’t have the key, he and I went to the bank to make arrangements to get into his box. We met with a person who told us they would have to drill out the lock at the cost of about a hundred dollars. And then we would have to schedule the break-in and be there when they did it. We wanted to get it done, but living as far away as I did, we never did get it scheduled.

Around the time my dad went into the nursing home, I found a safe deposit box key sitting on a shelf in his bedroom at his house that looked like the right one, when we were searching for an insurance policy. By then, my brothers and I were acting as joint powers-of-attorney and we just didn’t have time and did not make it a priority to get into the box.

About a year after his death, we were ready to finalize my dad’s estate. There was one final piece of unfinished business and that was the safe deposit box. My brothers and I debated whether or not to gain access to the box. There was a potential substantial legal cost to open it and there was a good possibility that there may have been nothing of monetary or even sentimental value stored there. We checked with our lawyer and found out we might be able to at least view the contents of the box if we were in search of a will, before we were actually to begin the process of legally gaining entrance. Well, we thought that we were already in possession of  his last will and testament, but you can’t be sure.

So, the three of us, as joint powers-of-attorney, went to the bank. It turns out, it was the correct key that I had in my possession and they did allow me to quickly rifle through the box. There were papers, pictures, and there was a will, but one that was older than the one we had in our possession. And yes……..there was some jewelry! There appeared to be a pocket watch and at least one ring. I didn’t have a long time to go exhaustively through the box and they would not have allowed me to leave with any contents in my possession anyway, but I saw ample reason to proceed with gaining access.

The three of us legally consolidated our executor status, so that my younger brother could act a sole executor of our father’s will. He and our lawyer then proceeded to claim the contents of the box.

About a month ago, following an appraisal of the contents, the three of us met for lunch to finally put closure on my dad’s estate. It turned out there were three pieces of jewelry to divide. That worked out well, as there are the three of us. There was my mother’s engagement ring, my great-grandfather’s pocket watch AND…… my dad’s wedding ring from his marriage to my mom! I knew it was THE ring, having seen it in his dresser drawer when I was young (don’t ask me what I was doing…. all I know was that I wasn’t supposed to be snooping  there in the first place). My dad’s ring was the least valuable piece of jewelry monetarily in the box, but it was the piece I most wanted.  My decision was confirmed when I tried it on my ring finger and it fit as if it had been sized for me!

So, to commemorate the 60th anniversary of my parents wedding, I am honored to be wearing my dad’s ring today!

Dad’s band is the thin one on top.

August 1st, 2021
View full playlist
Connect With Us Listen To Us On