Treasures and “tragedies” on the Trail! Unusual, interesting, cool things we’ve seen on our walks through town! We’ve been doing a lot of walking since COVID! We’ve seen a lot of unusual things in yards, fields, and mostly on the road! Some things you just have to take a picture of because of how unusual it is in juxta position to its location. (Check back often for more pictures!)

This one! This one? This one. This one, I can’t figure out–no way, no how. It’s a mattress on a fence in Downtown Chambersburg. Why is it there? Who put it there? Hmmmmm. Maybe someone didn’t know where to dispose of it??? And, it was the middle of the afternoon. Shouldn’t someone have called someone to remove it! Oh, maybe they are waiting for someone who needs a used mattress!!!! OMG! It made me laugh!!!! 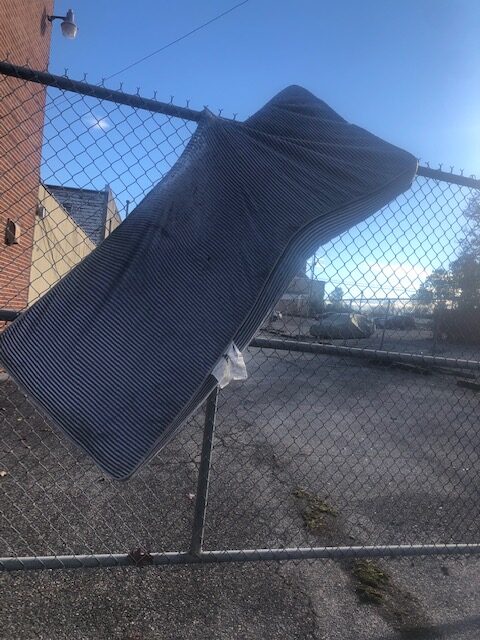 So this. A shopping cart in the middle of a vacant lot in an otherwise business district. Far away from any place with shopping carts!

This is why Aldi charges a quarter to use their carts. You get the quarter back! (Always wanted to be a quarterback)! I never have a quarter and have to carry my stuff, overloading my body with falling groceries! This is an update to our previous post! This bear was sitting all alone on a bridge overpass! He looked lost and sad. Well, good news; recently we walked by a house not too far from that bridge and were pleasantly surprised to see him on a bike! I don’t know if this is where he lives…or if someone brought him here knowing he’d be happy! Either way, glad to see him having some fun and off that bridge! This. Oh my goodness! This bear definitely has a story. We were walking and there he was sitting and waiting for his precious owner to come back for him. Did he fall out of the stroller? Did he get dropped out of a window? Hmmmm, I wonder. Someone came by and moved him to another part of the bridge. Take a look at the last picture! Will he move around like Where’s Waldo? We haven’t been by that location in a couple of days! I’ll let you know!

We’ve walked past this bench many, many times. Usually, someone is sitting on it! It’s on the Chambersburg Rails to Trails!!!! Occasionally, someone leaves something on the bench! Someone left a stuffed animal on the bench! This time, someone left an angel. A guardian angel??? It’s so funny because the sign says no sleeping on the bench!!! And, this angel is reading something? I’m guessing the Bible? It sure isn’t Time Magazine! Maybe it’s a good book? At least she isn’t looking at her phone!!!! Anyway, she is no longer there. So either someone took her home…or she flew away!!! So, yeah, another pair of shoes! Hiking shoes! So did the person just say, “These shoes don’t fit right; they hurt my feet” and took them off right there on the spot. Or, perhaps left them somewhere where someone who needs shoes might find them? They look like they were carefully place and not thrown there. Either way, apparently no one wants them, yet!!!!! So many shoes along the trail!!!!

Well they are all the rage!!! Crocs! But, obviously someone deserted them. I didn’t see anyone nearby that looked like they were missing shoes! Perhaps someone decided they could no longer be seen in such hideous shoes. Actually, I like Crocs. I own several pairs including tye-dye! Maybe someone left them for a passerby to pick up who needed a new pair. Not sure. I have two pairs of black Crocs. One has fur. Don’t judge me please. Anyway, if you want a pair, I know where you can find them!!! Um, yeah, it’s a kitchen sink alright! In fact, it’s everything AND the kitchen sink! I would say this is a treasure and tragedy!  A treasure if you happen to need a sink; a tragedy if you are the one who has to get rid of it. I’m guessing the story behind is pretty simple, they got a new sink! It actually looks more like a bathroom sink. Anyway, why is it here? I doubt most trash collectors will take it. And, if you missed bulky pickup/drop off, you’re out of luck. And, who wants this sitting in the house or garage? They must not have a basement, because that’s where it would end up in my house. Yes, it would be “temporary”! But, do you know how many “temporary” things are in our basement. What’s that? You, too, huh! So, I guess it’s here until someone can take it somewhere else. Or, maybe they hope someone will take it! Put a for sale sign on it and someone might take it!!!! Okay, this is definitely a tragedy!  There HAS to be a story behind this!!! The possibilities are endless! First thing that comes to mind is their team lost! That’s it Orioles!!! I’m bashing my TV!!! Maybe it was XBox or Playstation. They lost and just got sooooo mad! Maybe it was enough already when watching the news!!!! Maybe they were moving the TV and ooooops, someone dropped their end!!! Or, maybe they got a new TV and thought they’d have some fun! Wouldn’t you love to know!!!! I am amused by all of the signs we’ve seen about cleaning up your dog’s poop! This picture features two of the signs. I’ll definitely be posting the others. I have more than you would think!

Okay, I think this has to be classified as a tragedy!!!! First of all–seriously, people don’t clean up after their dog when it poops in someone’s yard. That is basic common courtesy! I don’t even like my dog walks in someone’s yard. I’d rather he poop in the street!!!

I know people forget their bags. This is when you pick it up with whatever you have. Um, you do have a used kleenex in your pocket, don’t you. This way it won’t accidentally go through the wash and create a mess.

I have mixed feelings about putting signs in your yard. But, I’m sure if you are cleaning up strange dogs poop, you would have to do something!!!!! It’s one thing to pick up your own dog’s poop. Quite another to pick up random poop!

Okay. Enough of THAT! I’ll post the other pictures at a later date! This is a treasure! Awe, soooo cute! He’s watching the passersby! Does he want to escape? Does he want to go on an adventure? Does someone take him in when it rains? What’s his name? Is he looking to escape or is he happy? He looks happy! 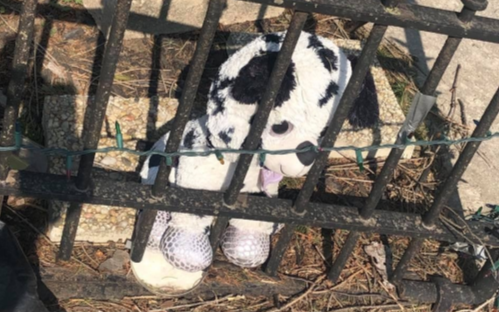 This is a treasure on our walk! This old house, which actually is an apartment house, has all kinds of kitschy stuff out front! These bears in the chair are my favorite! I love that they are just lounging watching traffic go by! Though, we have seen them in various stages of unrest. They’ve been snow covered! Somehow they had some sort of mishap where the chair ended up on top of them. I don’t even want to know!!!! Poor bears! I look forward to seeing them. They bring a smile to my face! 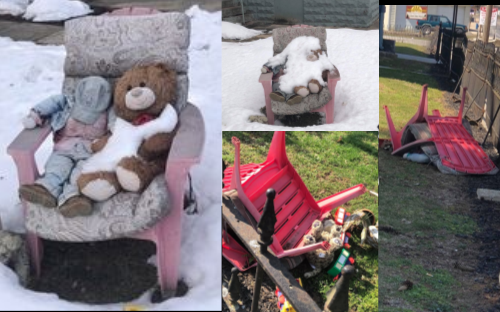 This is a treasure and a tragedy all at the same time. A relic from the past. The phone booth. Convenience and all the germs you care to touch at the same time. Since we all have cell phones, no one needs the public pay phone anymore. And, who carries dimes or quarters? But, wait! Why is it still here? And, what happened to the actual phone. Did someone tear it out and take it home? Is this here to have a place to stand when making a call? I doubt it! Not sure why it’s still there. But, it is a throw back for sure! So this treasure was on the sidewalk. I need to know the story!!!! Is it free and someone took the other pieces and will return for this one? Or, did the dog or kids make a stain and it had to be hosed off. I doubt that one. Hmmmm, maybe they are dividing the two sofas and just have no place for the center??? Maybe a parade is coming by later today and they want to be comfy? Or, maybe someone is just randomly giving it away.  Either way, it was unusual and cool enough that I had to grab a picture! This one is funny! A sandwich, partially eaten in the middle of the road.  What’s the story behind this? Someone took a bite and thought the sandwich was awful and threw it out the window??? Or, maybe they took a bite and realized they weren’t as hungry as they thought and threw it out the window???? Or, maybe it was a kid’s sandwich and they left it on the car seat. Or, maybe someone was walking down the street eating lunch and  WOOPS dropped it on the ground and decided not to pick it up!  It does look like a strange marking on top as if someone sunk their teeth into it. So, I’m going with the kid sandwich. Though, it is wheat bread. Like this! The world’s smallest Croc in the middle of the street!!!