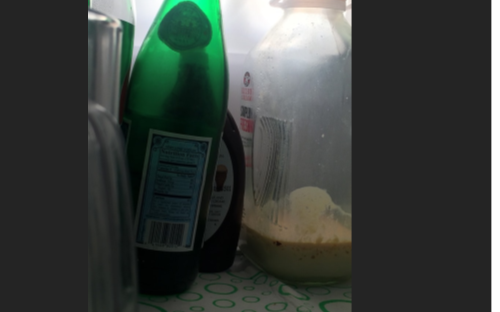 Jonathan came home a week before Christmas. He brought a bottle of fresh egg nog from a gourmet dairy store in Baltimore. We saved it for Christmas Day! Everyone enjoyed it. It was very rich, very thick!

As you can see, if you look at the picture, there is some left! There’s just one problem. The picture was taken yesterday. Almost a month after it was bottled. It’s REALLY, REALLY thick now!!!!

Now the question becomes, WHO will empty the bottle and put it in the dishwasher?? How long will it stay in the fridge? Next Christmas?

Jonathan would like to take the bottle back to the store, I suppose. There’s probably a deposit involved. Only he’s not home right now. Soooo, that leaves two of us. Three if you count the dog.

Who will empty it. Rick says he can’t. It will make him sick. I’m in favor of just throwing it in the trash, but, I know I won’t. It’s a nice bottle, worthy of recycling at the store. Nic the dog would definitely dispose of it if he could!

What’s the oldest thing in your refrigerator or freezer? Is it beyond recognition? You’re really in trouble when that happens. Perhaps you think- If I knew what it was, I might want it—so, I better not throw it away!!!! I’ve thawed stuff out to ID it. Usually it ends up in the trash! I should put labels on the container. I don’t because I tell myself that I’ll use it before it becomes necessary to have a label to ID it. Truly though, I just don’t feel like going that extra step! I’m usually tired and just shove it in the freezer!

There’s nothing worse than freezer smell that draws into some stuff. It seems it has to spend a long time in there before it acquires such a smell. What exactly is that smell??? It must be a combo of rotting food and freezer. So, I guess food does rot in the freezer–slowly. It seems like it shouldn’t rot because, well, it’s frozen.

Tell us what’s in your fridge or freezer and how far back has it been shoved!!!! And, what is now growing in it!!!!  And, who will eventually empty it??????